Giant Kites will now pull some of the worlds largest ships

I have always lived near the sea no matter where in the world I have been.

I windsurfed for many years in the South of France and wrote about those areas for magazines.

About the time I returned to the UK. I kinda hung up my wetsuit… it was colder and less fun. But Kiteboarding began to take hold and I often thought that this would be so fun in the shallow lagoons of Languedoc. But I missed it so hey ho!

Nevertheless it was clear that this could be scaled up, but at some point unmanageable for a human and could quickly get out of control! So step in tech to solve this problem!

Fuel today is expensive and wind is free! So to offset those price rises and whilst they cannot turn the engines off completely seawings and other manufacturers are now looking at those very same kites (albeit enlarged and computer assisted to control them efficiently) to pull large vessels.

This innovation promises to reverse the 19th Century moment when steam engines replaced wind power, sails currently in development will ultimately unfurl to as much as 10,000 square feet to pull giant vessels up to 1,000ft long through the waves. 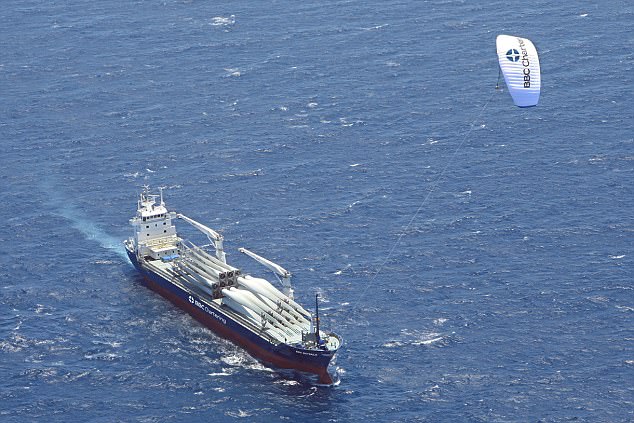 One system is already in use, created by German company SkySails. Its sail – seen fitted to a 430ft cargo vessel in the Daily Mail picture above – can unfurl to 90ft wide.

Coming to more uptodate ‘affordable’ boats we only have to look at the new SILENT 60 electric catamaran (above) that features a kite wing and 42 solar panels. Vessels are becoming hybrids. With zero emissions at 20 knots! But to run these kites they are not simply launched and tied to the bow. No they are hooked up to a computer that manages their pull and manoeuvres the kite more efficiently (and safely in a figure of eight) unmanned.

This is a tech story and something I have been watching. It has now moved well beyond the fad phase and due to the global fuel crises this may well be the future, and a very techie one to boot!

Have fun and Bon Vent!